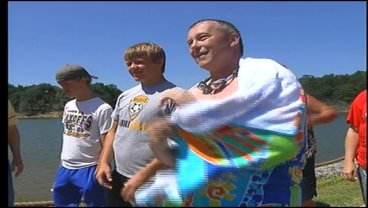 LAKE TEXOMA--Despite budget cuts for Oklahoma senior nutrition centers, Jeff Davis is determined to keep them in operation. In fact, he was so passionate about it that he swam across Lake Texoma.

A pool isn't enough for this man to stay in shape. He needs a whole lake.

Davis decided to swim across Lake Texoma---from Oklahoma to Texas---to raise money for the senior nutrition program at the Calera Community Center. Despite the choppy waters, he made it.

"He's been practicing in the pool and of course the conditions he said where really rough the first few hundred yards, but we had a lot of people praying and rooting for him," Nathan Williams said.

This bridge is more than a mile, in which Davis swam in a little over an hour.

"Well you know, there was one time where the boat was kind of lagging behind. I'm sure they were taking care of business, but the boat lagged behind and I though I was going to have to get out and push or something," Davis said.

For five months, Davis prepared for this by swimming twice a week and taking spinning classes three times a week. Davis' daughter joined her father, swimming with him for his last few hundred yards.

"Aw, you know, she's really special to me," Davis said. "I just really lover her a lot, and yea she's been supporting me though this and she was my spotter today."

Davis' daughter even helped make the check that was given to the center, showing that he raised $3,800.

"Good nutrition keeps seniors out of nursing homes," Davis said. "It starves off health conditions and chronic conditions that are debilitating, and it's just a good thing to keep those seniors independent and energetic as possible."

A swim that will keep this man and  hopefully others healthy.