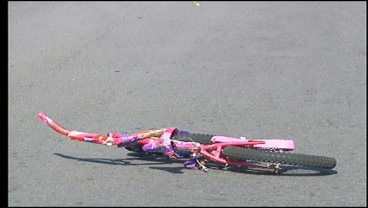 We had a chance to talk to some witnesses who saw the accident happen. This is what they had to say.

"The car hit him on his forehead and he flew--over there," Marky Zepeda said, Shakyri Johnson's friend.

"My friend Valerie and then my niece she came saying my brother had got hit and she was crying--I don't know what happened," Shakia Morrison, Shakyri Johnson's sister. "So, I saw everybody running. I took off running over there. They said he had flipped and hit his head on the bumper."

Friends of Johnson say that he lives in a different neighborhood and was visiting friends in the complex.

Sherman police responded within minutes to find Johnson still lying in the street.
Johnson was taken to Texoma Medical Center then airlifted to a hospital in Dallas.

His condition has not been released.