American Cars Catch Up To Import Durability, According to Study - KTEN.com - Texoma news, weather and sports

American Cars Catch Up To Import Durability, According to Study 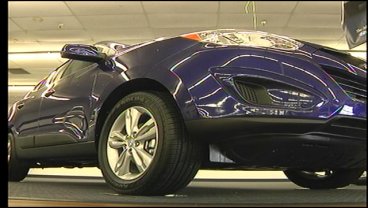 TEXOMA--If you are looking to buy a car soon, you might want to check out a domestic made car. For the first time in more than two decades, domestic vehicles averaged fewer problems than imports ---but not by much.

Against  imports, American cars may be catching up in the race for durability.

This year, a few American models have climbed the ranks in safety--but by a small margin. According to JD Power and Associates, on average domestics only had one fewer mechanical problem per 100 vehicles than imports.

"But now, domestic car companies are starting to realize how much quality and reliability and durability are valuable to a consumer," Utter said.

Lexus and Toyota have declined in the safety ranks, but other imports have kept their sales up. This local Hyundai dealership has seen a surge in cars leaving the lot.

"From last year, we're up 25 percent. For us, that's quite a bit," said Jade Lamance, Finance Manager at a local Hyundai dealership. "The Sonata 2011, Hyundai Sonata is a great car right now. Can't keep them on the lot, can't get enough of them."

Right now, one of the biggest selling points is fuel economy, and these dealerships say that car companies have anticipated this demand.

"Fuel mileage is a big thing--and in Hyundai--and that's the number one thing they look for here on these new cars they're coming out with," Lamance said.

"Well American car companies are starting to realize that fuel economy is just as important as anything else," Utter said.

It's not just the color anymore. Fuel economy and durability have car companies around the world competing for the customer.