Man Gets Caught in Machinery 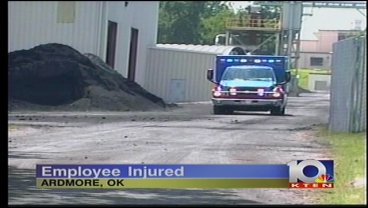 ARDMORE, OK - -A warehouse accident just before 3pm Thursday afternoon left one man injured. It happened at the Carbonyx plant in Ardmore.

An employee was caught in heavy machinery, he was freed from the machine soon after it happened.

First responders tell us the 41-year old man, who was twisted in the machine, suffered from second degree burns and broken ribs.

Carbonyx Carbon Technologies is a high-technology material science company engaged in the development and production of premium carbon and carbon alloy products.

It's located in the Ardmore Industrial Airpark on Boeing drive.

Southern Oklahoma Ambulance Service responded to the scene and took him to Mercy Memorial hospital in Ardmore.

We will keep you updated as soon as more information is released.