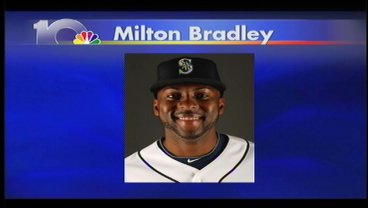 There are a multitude of character traits developed through athletics.  Some players absorb them -- others don't.  Those that don't turn into the Milton Bradley's of the world.  Last week the Rangers played Seattle and met up with former Ranger Milton Bradley who's with his 8th different team.  He's known as a 'bad guy' in baseball circles.  Apparently, Bradley's now a changed person.  He said he was always a good ballplayer but had no friends.  Bradley now says baseball is what he "does" not who he "is".  Bradley's a changed man but is apparently not hitting.  He'd rather have friends and not hit.  As Jay Leno said on the tonight show after his father died - "It's lonely at the top".  There's a great book out called "Coach - Lessons on Life" by Michael Lewis...The book's about having self-respect, sacrifice, courage and endurance.  Over at Pottsboro, Coach Matt Poe epitomizes the greatness that is athletics.