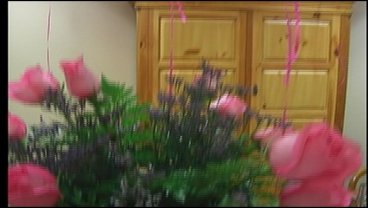 BONHAM, TX--Today was a very special day for one Texoma woman. She turned 106.

Ruth Moore Waterman celebrated her 106th birthday Wednesday, and friends and family say that she's stayed sharp with her sense of humor.

"She does say that she quit celebrating her birthday after 100 and its just a year every year after that- It's just a day," Julie Kinard said. "She didn't care after 100."

Even though Moore says she quit celebrating, that doesn't stop her friends and brother from cutting the cake.

"Every once in a while she make the statement and wonder why she's lived so long," Andrew Stone said.

Stone says he eats three meals a day with Ruth, and based on his conversations with her, he says she's still sharp.

"She has some humor in her--it's hard to believe," said Stone.

Adell Moore is Ruth's sister-in-law, and she says she has some fond memories of her.

Adell says that Ruth's sense of decorating extended to the garden as well.

"She loved to work in the yard," Adell Moore said. "She always had a beautiful yard wherever she lived. If they're renting an apartment, she's out working in the yard."

Her favorite color is pink, and this year she wanted burgers.

"That's just kinda what she requested," Kinard said. "We'll do whatever she wants--and she requested burgers again. So, that's what we did for her."

A birthday celebrated with a bit of rest.

Ruth is the oldest of four siblings and is only survived by her younger brother George Moore, who is 86.