One killed, another seriously injured in car, motorcycle accident 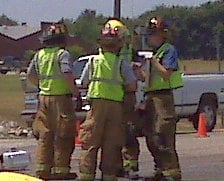 Three motorcycles were  eastbound on Highway 82 when an SUV struck one of the drivers.

The motorcycle driver was announced dead on scene, while the other two were unharmed.

There were three passengers in the SUV.

"Got on the scene with the vehicle. Lady was still in the vehicle," said Alan Meek, Whitesboro Fire Department Lieutenant. "We had to partially extricate her, but the motorcycle rider was dead on scene . . . Basically right now this time of year it's the time when all of the motorcycles are out because of the nice weather. It's hard to see the motorcycles and just have everybody be cautious over the motorcycles."

It took 20 minutes for authorities to get the woman out of the car. She is now at Texoma Medical Center.