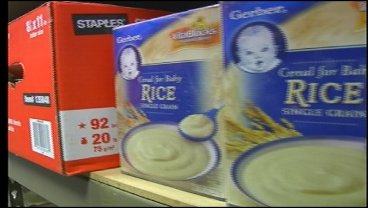 SHERMAN, TX--Even though some reports say the recession is letting up, as Jen French reports, some Texomans are still feeling the effects.

Locals on food stamps may not be the only ones who need help with their next meal. A social service agency in Sherman, TX is helping all kinds of families in need.

For some Texomans, hunger may only be a paycheck away.

"I see them when they're exhausted all of their savings and basically they're a month away from living in their car," said Donna Waters, Salvation Army social worker.

Waters said that nearly half of her clients seeking food assistance aren't on food stamps.

"A lot of folks who have never had to ask for assistance before, and they're coming in here because they've heard we can help," Waters said.

In Texas, food stamps are awarded based on total income and assets. However, food still may not be reaching the tables of those who need it.

"But there's a lot of reason that they may not qualify for food stamps or they haven't been approved yet," Waters said, "And just some have not applied."

She said among those reasons could be sudden home loss due to a fire, family illness or recent unemployment. Though some individuals may not qualify for food stamps, the Salvation Army helps those based on their current family crisis.

"We don't discriminate from anyone receiving food stamps," said Eric Shelton, Salvation Army Administrative Services Coordinator. "It's based on income and need."

According to a national news source, more than 1 in 10 residents in surrounding Texoma counties are on food stamps.

After submitting paperwork, an applicant must undergo an interview. It can take up to 30 days before benefits are awarded.