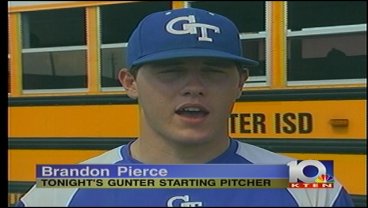 It's the biggest game of the year for the Gunter Tigers tonight. They play the number-one team in the state, the Brock Eagles.  The whole town of Gunter is expected to be in Grapevine for the big game.

This is after Brock made easy work of Whitewright.  The Tigers are 26 and 9, which isn't too shabby.  But, Brock is 32 and 0 and that's quite unusual.  Remember it's a one game playoff for all the marbles.  When a team would rather play a one game playoff as opposed to a best of three series, you can bet Old Mother Hubbard has a great pitcher in the cupboard.

And, that pitcher is Brandon Pierce who was clocked at 93-94 last weekend.  Pierce will be on the mound and he's ready to go.  He's already committed to Nebraska and he's happy all that's behind him.