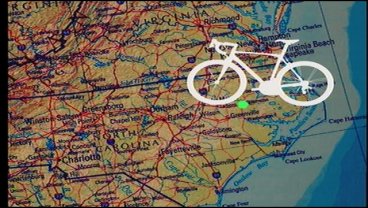 SHERMAN, TX -- Four college kids from Sherman are gearing up to ride their bikes across America for a good cause. They'll travel 3,000 miles in sixty days spreading the message of peace for the Republic of Congo in Africa. Deeda Payton spoke to the group about their inspiration.

One of the college students interned for Falling Whistles which is an organization that raises awareness about the conflict in the Congo and promotes peace. The young men say it may be a distant nation, but it's very close to their hearts, and they hope their ride will inspire others to make the world a better place.

They're airing up their tires, fastening their helmets, and sliding on their gloves all in preparation for a three-thousand mile bike ride across America. "I think we've got a long way to go," said Will Watson.

These four college students from Sherman, Texas are pedaling for peace. They'll start in Wilmington, North Carolina. Then, it's over the mountains, through the desert, all the way to Venice Beach, California. "I'm excited about it. I'm feeling good," said Andrew Childress.

The friends will make stops in sixty major cities along the way speaking out about the violence in the Republic of Congo and promoting the organization "Falling Whistles" which was started by a young man close to their age after a trip to Africa. "They told him this story about these whistle blowers, these kids that were too old to hold a gun, like five or six, and were given whistles and sent to the front lines and told to blow a whistle if they saw the enemy and they'd take the first round of bullets," said David Watson.

For these young men, riding their bikes is their way of blowing the whistle on the war in the Congo to hopefully stop another African child's whistle from falling. "It's a symbol for the war and our protest against it," said Conner Myers.

Even though none of these college students are professionally trained for their cross-country trip, they say they're buckling up for the ride and preparing for whatever comes their way. "it's gonna be hard but that's the point," said David Watson.

As they say, nothing good comes easy and if their journey inspires even one person to help their cause their sweat and tears will be well worth it.

The group plans to leave for North Carolina next week. They will start their bike ride on May 28th. We will check back in with them when they get back in June.