A Closer Look at the Dangers of Leaving Children in Cars - KTEN.com - Texoma news, weather and sports

A Closer Look at the Dangers of Leaving Children in Cars 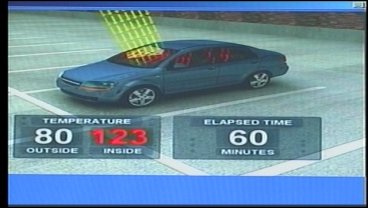 ARDMORE, OK- - A reminder of how dangerous and even deadly leaving kids inside a hot car can be.  After the scary situation in Ardmore, Tuesday, the child left locked in a car at a casino, we decided to do some research on children who die as a result of the heat. Meredith Saldana has more on this story.

Last year alone, more than 33 children in the United States died after being left inside hot cars, and most of them happened on mildly hot days.

An animation, courtesy of General Motors, shows a parked car on a day with an outside temperature of just 80-degrees.

In the first 10 minutes, the temperature rises 19 degrees.

Every additional 10 minutes the car's inside temperature continues to rise.

After a time lapse of just one hour, the car's temperature reaches a steamy 123 degrees.

We visited the Ardmore Fire Department and used their thermal imager to find out if these numbers were accurate.

Here's what firefighter Gabe Parker found, "Okay, this truck's been sitting here for 2 hours and it's reading 132 degrees. That's pretty hot for a day that's 75 degrees outside."

132-degrees, even surprised the professionals.

Firefighter Dave Tomlinson says, "I did not think it'd be that hot at all."

I asked Tomlinson, "How dangerous is a temperature like that?"

"They're very susceptible to cold temperature and heat that the average adult just wouldn't be. So, for you or I go be in a locked car for 10-15 minutes would be uncomfortable and maybe unbearable, for a small child it's just down right dangerous."

Landis says even playing outside in high temperatures can be dangerous for small children.

"Key's for mom and dad is to make sure the child is extremely well hydrated prior to even going outside."

Just a reminder, it is illegal in both the state of Oklahoma and Texas to leave children unattended in a vehicle.