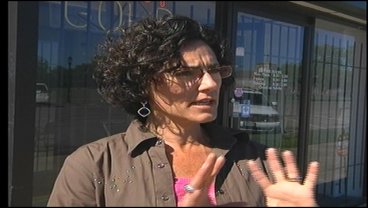 DENISON, TX -- There may soon be a new development in downtown Denison on the site of the old high school. We were the first to tell you about the city's tentative plans to partner with a private donor to build a new library and civic center. Deeda Payton spoke to local residents about their feelings toward the possible project.

The old Denison High School was a landmark in the community. It's demolition didn't come easy."I dislike the fact that the old building was torn down. It was a landmark and it was special to me," said Denison Resident, Ken Traweek.

Today, there is an empty lot where the school once stood that's still a painful sight for many residents and former students. "I wish we could've kept some of it because it's such a beautiful building, but it's time to move on," said downtown business owner, Cindy Kuneman.

Plans to move on are already in the works. The city has tentatively agreed to partner with a private donor to build a library, museum, and civic center on the property. "Everybody's heart sunk a little when the school went down, but I'm just really glad to see something's going to come up new," said downtown business owner, Greg Guymon.

"I really think it'd be an awesome asset to downtown Denison. I just think it would boost our economy. The traffic count downtown would go up dramatically," said downtown business owner, Eric Batey.

The city says the project is in the preliminary stages and they still have a lot of details to work out, so it's still far from a done deal.

Residents, though, say they welcome any development that will bring the community together. "I think it's great. I think we need something for our community and our children, and I think it'll be good," said Kuneman.

Residents are hoping that if all goes to plan, the new development will help local families make new memories on the land that holds so much nostalgia for them.

City officials expect to know more in the coming months.