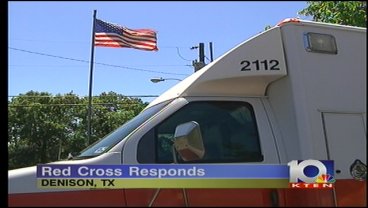 DENISON, TX -- In the south and southeast at least 29 people have been killed by either floodwaters or tornadoes. Now the Texoma Chapter of the Red Cross is being called to action. Deeda Payton spoke to the first local volunteer to be deployed to Mississippi to help tornado victims.

The Texoma Chapter of the Red Cross in Denison responds to all kinds of disasters locally and nationally. They started organizing volunteers to respond to the tornado relief in the southeast last week. The director says she plans to send between four and six volunteers total to Mississippi and Tennessee over the next few days.

One of the local volunteers, Jennifer Bedell, arrived in Mississippi Tuesday afternoon. We spoke with her over the phone about her efforts to help the victims. "Probably start tomorrow. I'll be out doing what we call outreach, going out to homes that have been destroyed and damaged and talking with the families that have needs that the Red Cross can help them with," said Bedell.

Bedell is in Jackson, Mississippi now and plans to head into Yazoo City, Mississippi Wednesday. She says she will be there helping as long as she is needed which could be up to three weeks.

The Red Cross finances all of their volunteers trips and disaster efforts and always appreciate donations. If you would like to make a donation you can call 1-800-Red Cross or make a ten dollar donation by texting "REDCROSS" to 90999