Parents Arrested for Leaving Their Baby in the Car at a Casino - KTEN.com - Texoma news, weather and sports 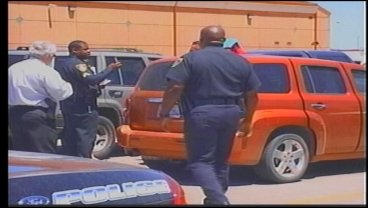 ARDMORE, OK- - It's a story sure to make you shake your head and wonder, an 18-month-old little girl was locked in a hot car in Ardmore. Police say the child's parents left her to go inside a local casino. Meredith Saldana was on the scene and has more on this story.

A security officer at the Gold's Casino in Ardmore saw the baby locked in the car and called police.

It happened at Gold's Casino on Sam Noble Parkway and "P" Street in Ardmore just after 1 o'clock, Tuesday.

When police arrived they found an 18-month old little girl locked inside a car.

Police found the parents inside the casino and believe they had been inside for 30-minutes to an hour while the child sat locked in a car with the windows up.

Sergeant Eric Hamblin says thankfully the child does seem to be okay.

"It is a little warm out today, it's about 80 degrees. They immediately got the child out of the car, had medics come over and check the child out. The child is okay, and at this time the parents have been arrested," says Hamblin.

Kathleen Moody and Charles Ward of Ardmore were arrested and are being charged with child endangerment.

The child was immediately turned over to DHS, then given to family members on the scene.

I spoke with the baby's uncle who tells me he's thankful that his niece was okay and was upset that she was left in the car.