After four years, Texoma Living Magazine comes to an end 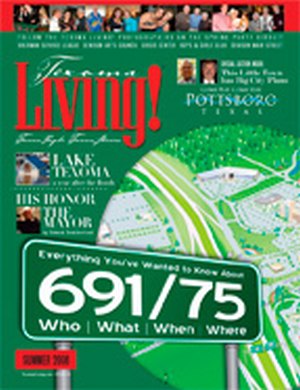 From the publishers of Texoma Living Magazine:

After nearly four years and seventeen issues, Texoma's best-read publication will publish for the last time with the release of the May/June edition. Owner and publisher Dan Acree said the rocky economy of the past two years came at a time when financial stability was critical for the magazine's continued growth.

The award-winning magazine was launched in early 2007 and has published continuously, increasing from a quarterly to a bi-monthly in 2009. Acree said the level of acceptance by readers is phenomenal. "The Texoma Living! name stands for a superior level of quality in content and design. Producing a magazine like this in Texoma was a grand experiment. We had the greatest hopes for its survival," said Acree.

Don Kelley, a Los Angeles media consultant said Texoma Living! is a rare gem among city and regional magazines. "Everything about this publication is exceptional. To survive over three years in this economy is a feat in itself, and to produce such a quality magazine in a market of under 150,000 is a testament to the talent behind it," said Kelley.

The May/June issue is traditionally the largest and most read of the magazine's annual six issues and has the largest distribution of any other issue. Twenty-five thousand copies of the final issue will be distributed between the end of May and mid-June. Based on generally accepted industry calculations more than 100,000 people in the Texoma market will eventually see the final issue.

"The Great Recession of 2008-2009 put pressure on business owners and ultimately cut into advertising spending," said Acree. Local magazines generate more than ninety-percent of revenue from sales of ads on the pages. Subscriptions account for a small percentage of income.

"Three years ago we could have found the money to continue," said Acree, "but investors who might have once considered a long shot like this magazine a worthwhile community investment, considered it to be too risky in the current environment."

"What saddens me most is how many great stories won't be told on our pages. There is a wealth of fascinating stories about interesting people still out there," said Edward Southerland editor-in-chief of Texoma Living! since the beginning.

"It's just another business venture that didn't make the cut I suppose," said Acree, "but I sincerely believe Texoma Living! Magazine can be considered as being one of the area's greatest community assets in promoting what is special and unique about our community."