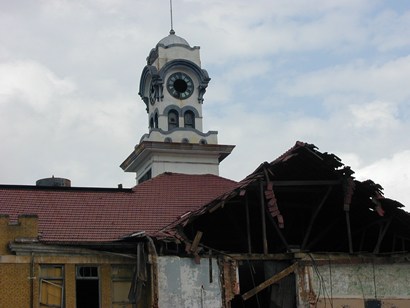 The Denison City Council Monday night poured over a document in executive session which would basically allow the city to partner with a large monetary donor to make a new library project a reality.
A memorandum of understanding between the donor and the city is the first step in a partnership that, if it comes to fruition, would see the building of a new library and civic center along with a museum on the site of the historic old Denison High School.
After that school closed as a middle school in 1986, it was the center of attention amid what could be done to save the building. It was the site of the first free, graded school in Texas and was on the state's most endangered building list. After many attempts to raise money to preserve the building, ultimately the city of Denison decided to tear it down, amid much controversy.
The preservation group Denison Heritage Inc., when turning the building over to the city, retained deed restriction rights for the property, deeming any future use must be public in nature.
Denison Mayor Robert Brady said the new project would fit into those parameters and others close to this deal say a much-needed learning center is just a part of why this project could change the landscape of downtown Denison.
City officials do caution that this project is in the early stages.
For now, officials say, the rules and regulations of a private donor and city-run project have to be ironed out before any dirt could be turned on a new building and that's to come in the next 30 days.