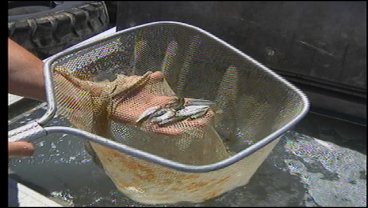 BRYAN COUNTY, OK -- The striped bass industry on Lake Texoma is huge and a big part of that $30 million fishery is the bait known as shad, but the Oklahoma Department of Wildlife Preservation is reporting a shortage of thread fin shad. Deeda Payton reports on how they are trying to combat the problem.

This is only the fourth substantial shad shortage in the lake's history. Monday, the wildlife department began restocking Lake Texoma because they don't want to take a chance on the fish not replenishing themselves.

Shad is a little fish, but a shortage of it on Lake Texoma can cause a big problem. That's why the wildlife department collected 2500 Thread Fin Shad from a power plant lake further north in Oklahoma and dumped them into Lake Texoma. "We had a particularly cold and prolonged winter and Thread Fin Shad are known to stress and sometimes die in these conditions. We're just making sure there's sufficient broodstrock to replenish the lake," said Fishery Supervisor, Matt Mauck.

Guides and fisherman depend on shad for bait to catch striped bass. Shad is also the main food for all kinds of sport fish.

The wildlife department says they will continue restocking the shad population. They hope to dump thousands more into Lake Texoma before next weekend.