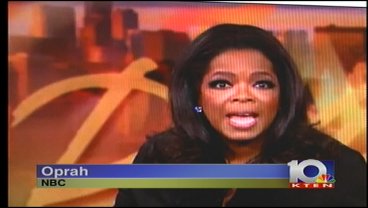 Cell phone use behind the wheel is a deadly epidemic.  Two years ago distracted driving ranked 4th among the most common reasons for the cause of accidents.  Now, it ranks number one and the growing death toll is causing Oprah to take a stand, asking everyone to make a pledge to put down their cell phones behind the wheel.

Oprah spread her message over the airwaves.  "No one needs to die today, be paralyzed or maimed today because you were distracted by your cell phone.  So please, if you have to use your cell phone, pull over to a safe place.  Thanks for being responsible."

Oprah's big movement is catching local attention.  "I thought it was interesting, and I am actually recording it", says Jeannette Livsey a local business woman.

While cell phone use is causing many accidents across our country and our area, teens can't seem to resist the temptation to text.  "My grandson averages 1,500 texts a week", says Jerry Cantrell a Texoma Driving Instructor.  American's addiction to their phone is causing drivers to become irresponsible and take their eyes off the road.

But talking about the dangers is not enough, we decided to prove how distracting using your phone while driving really can be.  We asked one local Texoman to play a driving arcade game.  She played twice, first not using a cell phone, the second time she began to text.  The first game she placed second the next time she played she crashed so many times she did not even finish the game.  She says it's an important lesson.  "Looking at my cell phone, I could have hurt a lot of people if I was really on the road and texting at the same time.  I think this will be a big lesson for teens and kids on the road", says Rashieeda Ellis.