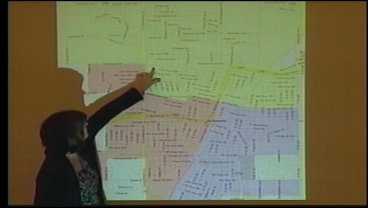 ARDMORE, OK- - Soon more than two dozen Ardmore School District employees will be without a job. The district is also going to close an entire elementary school. The affects will be felt far and wide from the laid-off employees, to parents, and students. The cuts come as the district struggles with millions of dollars in debt. Meredith Saldana was at the special meeting, she has more on this story.

Superintendent Dr. Ruth Ann Carr used PowerPoint to go over a review in revenue from the last year.

They were then dealt numerous cuts from the state, which Dr. Carr says forced them to use $1.5-million of the carryover to prevent furloughs and layoffs, this year.

The district says additional cuts have caused them to have to cut between $2.3 and $3.3 million.

So the budget committee proposed their plan and the school board approved it.

Budget committee member Johncy Martin says,  "There was a lot of give and take and a lot of concerns being given. So yes, it was pretty- it wasn't a great thing to do but it was pretty well agreed upon."

One of the many items on the list, closing Franklin Elementary in the fall.

Those students will be spread out to the other elementary's across the district.

They'll also be cutting about 27 jobs.

Dr. Carr says 20 of them are teachers.

They will also be increasing class room size and the school year will now start September 1st.

The school days will be 20 minutes longer, saving the district more than $200,000 in utilities and operational costs.

With all the cuts that were made, turns out, this may not be the end of the budget crisis either.

Dr. Carr says, "We were told that we may get an additional cut in May because of the 1017 funds. I hope that's not the case. We won't know until May 18th, after the 18th, but they told us that it was a real possibility."

Parents of Franklin students will receive letters in the mail next week explaining where their child will be attending school in the fall.