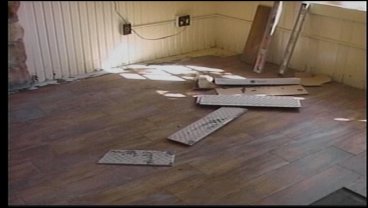 LAKE MURRAY, OK- - If you build it, they will come. That's the theory behind some major construction at Lake Murray. Their cabins are getting quite the makeover. They were built back in the 1930's and '40's. Meredith Saldana visited Lake Murray to find out exactly what they're doing and how it's being funded.

With all the budget crunches in the state of Oklahoma, Lake Murray's General Manager Lewis Logan said he's excited to have received nearly a million dollars to renovate the cabins.

It's no secret that the cabins at Lake Murray Lodge need some work.

But visit them now and you may be surprised.

GM Lewis Logan says, "It's exciting. It's exciting to be able to see Lake Murray and know where it's been and take it back to the days when it was creme de la creme of the resorts here in Oklahoma and we will get there. We are on the move to upgrade everything about the resort so we're excited, very excited about it."

The project is being funded by oil and gas reserve leases thanks to legislation passed a few years ago.

"The initial lease was for 10 million dollars and only the interest and a small percentage can be used for capital improvements so the trust fund will be on going from now on."

Logan said that despite the recent economic struggles in Oklahoma, they weren't too surprised they received the money.

"We've seen this happen through the other state parks. So we knew what the end result would be. We were just sitting sort of antsy with our fingers crossed (hoping) that eventually it would get to us and it has and this is our time. It's wonderful, it's absolutely marvelous."

They're hoping to have 10 cabins finished by Memorial Day and the rest finished by the first of the year.