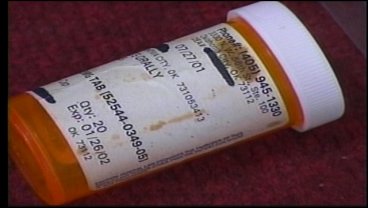 ARDMORE, OK- - The director of the Oklahoma Bureau of Narcotics visited Ardmore High School, Wednesday, to talk about prescription drug abuse and underage drinking.  Meredith Saldana was there; she has an in depth look at how this problem affects Carter County and Oklahoma.

And 88% of them reported consuming that alcohol at a friend's house.

The director of the OBN, Darrell Weaver, spoke at the assembly to discuss the dangers of drinking and prescription drug abuse.

Weaver talked about a case that personally touched him involving the death of an 18 year-old boy who overdosed on prescription drugs.

"Reading his autopsy report, years ago, it really affected me because it affects Oklahomans and it affects young people," says Weaver. "To see young people die is just unacceptable to me."

"In 2008 the drug overdose deaths were 612. Of those, 86% were prescriptions, so it's killing Oklahomans and its readily available. We want young people to know there is a price to pay with those."

Students tell us the assembly was a much needed wake up call.

Ardmore student Ronnie Washington says, "I believe it opened a lot of people's eyes. It was a lot of truth involved in his stories and it was great. I'm glad that the students of AHS got to witness this cause this is real. This is like right here. Yeah, I thought it was pretty good."

If you're interested in learning more, The Oklahoma Bureau of Narcotics will be holding a town hall meeting Wednesday night at 6:30 at the Ardmore Convention Center.

The theme is "This is Your Wake Up Call."

It's free and they encourage you to bring your teen.

A former state representative will also be there to share his testimony about the sudden death of his 22-year old son, to prescription drug overdose.

The health department will be giving out $50 gift cards to Walmart every 20 minutes and a $100 gift card at the end of the night.

It's an  incentive for parents and teens to attend!