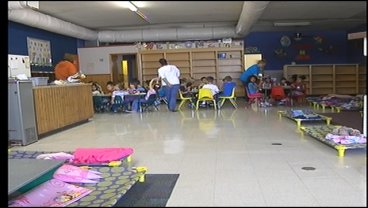 The proposed changes only have tentative approval right now, and all the details haven't yet been announced, but it would increase training hours for caregivers and would lower children-to-caregiver ratios.

Taking care of this many four and five year olds can be a tough job. That's why Texas requires a relatively small student-to-caregiver ratio for all licensed daycares and is currently looking to decrease that ratio. "The pros would be that you would have less children for every teacher which would mean more individualized attention to each child," said Larry Morris, owner of Jack and Jen Daycares.

The state is also proposing an increase in the number of required training hours for caregivers, but local daycare owners say these changes will come at a cost. "We try to stay as fair as we can be, but this proposal, especially the classroom ratio, would raise expenses, and I'm sure that it would result in increased prices to our customers," said Morris.

Jack and Jen Daycare in Sherman says they are very cost conscience because a lot of their clients are single-parents with full-time jobs. "They're the least able to handle a price increase," said Morris.

So while these changes to childcare may be beneficial they aren't free. The argument is that local families will opt for unlicensed and unregulated daycares they can afford over the private centers and their costly mandates.

If approved, the new standards are expected to take effect December first. Daycares will have an extra two years to comply with ratio changes.