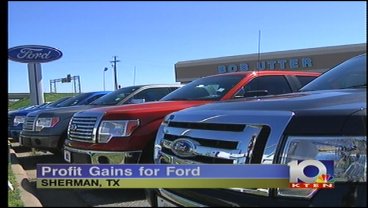 Bob Utter says he couldn't be happier about the profit gains; after all he does own Bob Utter Ford in Sherman, but more than the money, he says he is proud that the company is rebounding without federal dollars.

Last year, auto dealerships across the country struggled, some nearly collapsed. Ford reported a loss of more than $1.4 billion.

This quarter, though, Ford's net profit totaled $2.1 billion, a hefty turnaround the company attributes to the strong sales of their new products around the world.

Local dealers, though, say they just didn't know it would rebound this quickly. "I was a little surprised at a 2.1 billion dollar profit, but I know that Ford is adamant that they need to pay down their debt even though it's not federal government debt, and they've been working really hard to get there," said Utter.

Ford says sales from the new Taurus, Fusion, F-150 and Focus cars and trucks helped it bump up it's U.S. market share, too. Ford also said it became the market leader in Canada.

These profit gains are not a result of the government Cash for cCunkers program. Utter says those benefits showed in last quarter's profit.