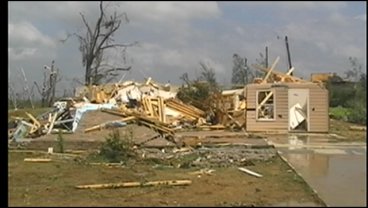 YAZOO CITY, MO -- KTEN Storm Chaser, Kris Hair, followed a deadly line of storms over the weekend all the way to Yazoo City, Missouri. He says he actually got caught in the tornado and was scared to death even after eight years of storm chasing. Deeda Payton shares his story.

KTEN Storm Chaser, Kris Hair, drove right into the outer bands of the tornado that ripped apart communities in Mississippi. "We knew we were close, but we didn't know how close until the storm actually took right turn," said Hair.

He says as soon as they saw the funnel they drove as fast they could the opposite direction in ninety to a hundred mile an hour winds with debris flying over their truck. "We followed a guy that had been blown off the road and we got him out of the ditch," said Hair.

Then Kris and his crew drove into Yazoo City, a community that suffered the worst of the damage and lost the most lives. "You could see people walking down the road, bloodied, and not in good shape. They were bringing people out on four-wheelers on stretchers," said Hair.

He says it was an unbelievable sight. Everything was gone. Ninety foot pine trees snapped at their base. Homes were completely leveled at the foundation. "It was very similar to Lone Grove. The main thing you notice immediately is the people aren't excited. It's just a stunned look on everybody, and it's a really somber experience," said Hair.

When he realized the magnitude of what had just happened around him, he says he went house to house pulling people from underneath the debris. "At that point, you don't chase anymore. You help people that need the help," said Hair.