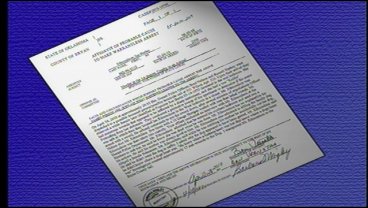 DURANT, OK -- More details in a bizarre murder investigation out of Durant. A man has now, according to police, admitted to killing his own mother. Deeda Payton went to the apartment complex where police say the murder took place.

We've obtained a copy of the court affidavit. In it, Edmondson admitted he used two large swords to stab her. He said he knew she was dead when he was done, but he had no explanation for his actions.

He also said he accidentally cut the dog. Then he didn't want it to suffer. Investigators asked why the dog appeared to be gutted, and according to the affidavit, Edmondson said he didn't know where the heart was.

The call came into police Saturday night. It was actually the woman's daughter who found her mother's body. She went to investigate after not hearing from her for several days. The family is obviously in shock with the crime and didn't want to go on camera. They did tell me their brother is a paranoid schizophrenic, and they believe he should be in a hospital, not a jail.

When police got to the Timber Ridge Apartments in the five hundred block of Wilson Street Saturday night, they found the woman's body inside along with the dead dog.

The affidavit said his mother still had two knives protruding from her abdomen. The dog had approximately 17 stab wounds. What's even more disturbing, the woman's 22-year old son was still in the apartment in a bedroom armed with a sword. After 40-minutes of negotiations, police fired five rounds of bean bags from shotguns and arrested him.

I asked the family today if they ever had any indication that their brother could be violent, they said no. As for his initial court hearing, Edmondson is being held without bail for the murder charge. Plus, a one million dollar bond on a charge of cruelty to an animal. We'll of course follow up as this investigation continues.