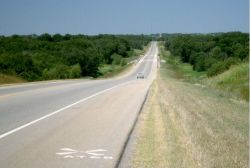 We're talking about your money.
In Bryan County, tax dollars are hard at work with three big projects.
Today, Bryan County held a meeting to discuss the pre-construction of the next three miles of Leavenworth Trail. And earlier this week, renovations for the Blue River Bridge were discussed along with a detention services agreement.
Tax dollars are being poured into projects across Bryan County.
The first task is filling up three miles of rough road along Leavenworth Trail.
"We discussed when the project will begin for mile 3, 4, and 5," said Monty Montgomery, Bryan County commissioner.
It's the busiest road in Bryan County, where one-inch pot holes run rampant.
"We have been waiting for this for over a year now, and we are pleased and excited to be able to provide this for the residents of Bryan County."
The project will be paid for by stimulus funds granted through the Chickasaw Nation. They hope to soon complete a sixth mile. "That would be funded from a different set of funds coming through the State of Oklahoma, and we haven't gotten the final agreement on the sixth mile just yet," Montgomery said.
The other project set to start in August is the Blue River Bridge.
Tony Simmons, Bryan County commissioner, said, "The bridge we are replacing is settling and its getting real critical on crossing, and we have had to lower the tungent; it's just one of the bridges in Bryan County that has to be replaced. State funds will complete that $1.2 million project.
And county funds are set to help community expansion projects such as the detention services agreement.
Simmons said, "Just to make more room, and then and hopefully we can expand the jail in the near future," He's hoping to do with one jail what they would be doing with two.
Monday, officials will begin construction on the three miles across Leavenworth Trail.
In August, the Blue River Bridge will be under construction.
No word on the start date for the detention services agreement.