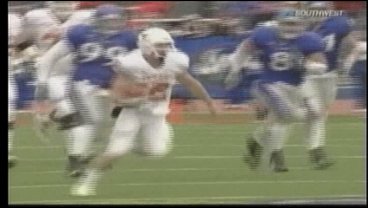 ARDMORE, OK -- Seventy years ago baseball was the nation's past-time -- and the U.S. was being introduced to Roosevelts "The New Deal" with a chicken for every pot...Boy how times have changed -- In this microwave society we don't have time to pay attention to 162 baseball games in a row -- but we do have just enough time to watch the Cowboys play once a week...Thus, the NFL draft has made it to prime time...

OU's Jermain Greshem's not a house-hold name like Bradford or McCoy.  He's a tight end.  Plus, he had a bad knee last year...But, Gil Brandt says that Gresham is the next Kellen Winslow Junior...He should be one of the top five picks...But we will be paying attention to the names McCoy, Bradford and Tsu.