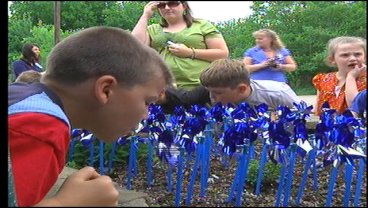 SHERMAN, TX -- One in four girls will be sexually abused before her 18th birthday in this country. For boys, it's one in six. Deeda Payton reports on how a local child advocacy center is creating awareness of the issue.

April is Child Abuse Prevention and Awareness month. It's thirty days to open the public's eyes to a problem of epic proportions that's going on right under our noses.

Local children walked over to the Children's Advocacy Center in Sherman and participated in a special ceremony to create awareness of the issue of child abuse in Grayson County. "We've gathered here with a number of agencies that fight child abuse in this community as well as the Montessori kids that came over to join us today with the pinwheels," said Executive Director of the Children's Advocacy Center, Martha Nuckols.

The blue pinwheels represent every child the local agency has interviewed about possible abuse in the last year. "Our goal is to provide a child-friendly place for children to come tell their story about abuse. We interview them for CPS and law enforcement and we proceed with whatever needs to happen as far as prosecution or protection of the child."

The local children placed 350 pinwheels in the soil so everyone could see the problem our community is up against. "On average, myself and my partner get assigned five to six cases a month that directly involve children and abuse," Sherman Police Detective, Jeremy Cox.

That's in Sherman alone, and authorities say often times the abuse happens in the child's home. "That is most often the case is that the perpetrator is known to the victim usually a family member or friend, and often that's how the perpetrator gains access to the child is through some type of relationship and they exploit that," said Cox.

Nationally, every year almost a million children are abused, and children's advocacy groups want to teach the public how to handle these situations. "Know what the signs are so you know if your child is being abused, and if your child comes to you, try not to overreact and listen to them and then seek help," said Nuckols.

Authorities say the first step to solving a problem is acknowledging that it is happening, and that's what this month is all about awareness and prevention.