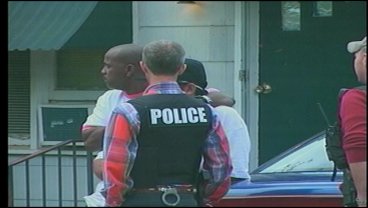 ARDMORE, OK- - It was breaking news Monday night at 10. We now know more about a murder investigation in Ardmore and the heartbreak for a local family.  Meredith Saldana has more on this story.

Friends and family of 36-year-old Eric Knight say they're saddened and confused by the loss, and they don't understand why anybody would have taken his life.

Around 9:15 Monday night, Ardmore police received a call of shots fired in the 900 block of Roff Street.

Eric Knight was in his home with 4 other people when several men broke into his home.

Sergeant Eric Hamblin explains what happened, "At some point during the robbery, shots were fired.  Four victims were able to escape without injury and Mr. Knight was struck and killed at the scene."

Tuesday, Eric Knight's loved ones gathered at his home.

Flowers were placed in the front yard in remembrance.

Now, friends and family are trying to make sense of his murder.

Childhood friend Barry Keysue says, "The world is going to be missing a true soldier, he gave the shirt off his back."

McGee says she doesn't understand why this happened and says she'll miss her dad.

The police are now asking for help finding the people responsible for Knight's death.

"These are dangerous people, obviously, so they're able to commit this type of crime. We certainly want to get them off the streets as quickly as possible to provide some level of comfort for the victim's family and the citizens," says Hamblin.

For now, the family is finding comfort in each other and hoping that justice will be served.

"He will always be here; they might have took him from us, but he is always here, and they did not win," says McGee.

The police are looking for several black males, possibly a Hispanic, Indian and white male as well.

Police have questioned neighbors and witnesses and are now asking anyone with information to contact the Ardmore Police Department.