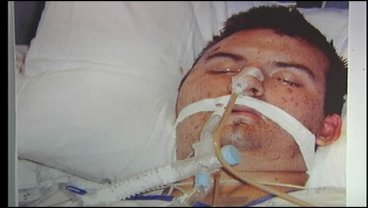 GRAYSON COUNTY, TX -- Two local mothers are speaking out against drunk driving just days before the annual MADD Walk in Dallas. You may remember their story, in 2005 their sons were nearly killed by a drunk driver in Sherman. Deeda Payton reports on their efforts to raise awareness about the dangers of drinking and driving.

If you've never been involved in a drunk driving accident, you may not be aware of the growing problem in our area and around the country. The women I spoke with say that's why they're involved with Mothers Against Drunk Driving, to put their faces on the issue.

Mothers Lisa Ward and Cheryl McKenzie have been friends for years, but in 2005 their relationship strengthened when their teenage sons, Chase and Justin, were hit and nearly killed by a drunk driver on Texoma Parkway in Sherman.

Their bond became Mothers Against Drunk Driving. "I have to be honest. There's days when I say I've forgiven him, but I know there's days that I see Justin struggle. On those days, I question whether I really have, it's really hard," said McKenzie.

Both Cheryl and Lisa's sons suffered brain damage from the wreck, but as members of MADD, they know how lucky they are that their sons survived. "When I see it on the news repeatedly which it's been in the news a lot lately, you know, I know what these families are going through," said Ward.

The women are currently raising money for MADD's upcoming fundraiser, "Walk Like MADD," to create awareness to prevent their story from becoming someone else's future. "We can't change what happened, but we can change how we react to it," said Ward.

Lisa, an elementary teacher, is even speaking to her fourth and fifth graders about the dangers of drinking and driving. Many have donated their own money from either doing chores around the house or that they got from the tooth fairy to MADD. "I donated $50. I think people need to be aware of drinking and driving because it's very dangerous," said fifth grader, Ethan Long.

"If one of the fourth or fifth graders remembers this when they are given that choice to drink then it's all worth it," said Ward.

If you are interested in participating or donating to "Walk Like MADD," go to www.teamfaith.webs.com  or www.madd.org for more information.