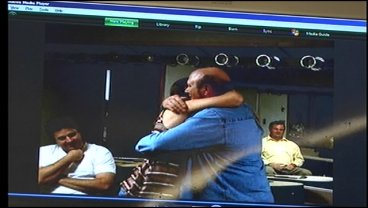 A lot has been said about Facebook and Myspace, but if not for these social networking sites, Shanna Cloudt might never have found her father. She says one search turned up a whole family, her family, she never knew she had.

It took the birth of her daughter to motivate a search for what she calls the other half of her life. "I felt like there was always something missing."

All she had was a name so she went on Myspace, typed in Randy Mitchell, and found the man she'd been looking for. His profile pictures showed a musician, guitar in hand. "I knew it when I saw it," said Cloudt.

"Oh it was awesome! I got this message on Myspace and then at the very end of the letter she says, you may be my dad. When I called her and she answered the phone, I knew right away that she was my daughter," said Mitchell.

After a few months and several long phone conversations, Shanna surprised her newly found father at a Vince Gill concert in Chattanooga, Tennessee where he was living. Randy was the opening act. "Vince took me over and introduced me to my dad," said Cloudt.

"He gets up and walks out of the room and he walks back in with Shanna and he said I want you to meet a friend of mine and I was I mean I've never been so shocked in my life," said Mitchell.

It's been two years since the two met, but they both say they feel like they've known each other all of their lives. "It changed my life completely," said Cloudt.

Shanna has been to Chattanooga now several times to visit and she says they talk almost everyday. They both say they can't imagine their lives without one another.