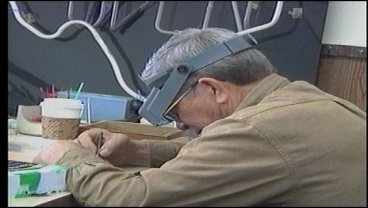 DENISON, TX -- It's the end of an era. After thirty years in Denison, a well-known watchmaker is hanging up his loop and closing his doors forever. Deeda Payton was there as Roberts said goodbye to his jewelry store.

Maynard "Butch" Roberts has been keeping time for his customers for thirty years thanks to his steady hands and trusty loop. "I wear this everyday, all day long, so people know me by this. If I wear another something else people don't recognize me," said Roberts.

He owns Roberts Jewelry and Watch Repair on Main Street in Downtown Denison, but he says never takes his work home with him. "Yea, I don't own a watch. I don't need one. I have time in my head."

He's a master at his craft, and there isn't anything Roberts hasn't fixed from pearls to eyeglasses, he's done it all! "There's all kinds of stories, it'd take you weeks to tell all of them. I had a woman give me her false teeth because she liked me!."

Now after a lifetime behind the loop, Roberts is selling his businesses and all of his tools. "Once this store is sold, I won't ever do another watch repair again." He says he is going to work on his farm raising livestock and grand kids.

Roberts Jewelry and Watch Repair will be auctioned off this Saturday, April 17th at ten o'clock. Visit http://www.rockinsauctionservices.com/auction_detail.php?id=132018 for more details.