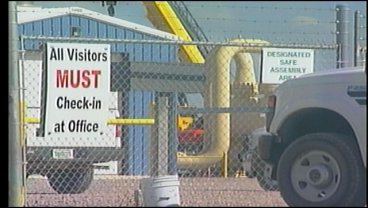 BRYAN COUNTY, OK- It was breaking news Wednesday afternoon, a pipeline explosion near Bennington, Oklahoma. It's about thirty miles or so east of Durant. Meredith Saldana has more details on what happened and the man who was injured.

We're told the man involved in the explosion has third degree burns on his hands and face.

Brian Alford, the spokesman for OG&E's sister company Enogex, a natural gas company, tells us workers at the site near Bennington were attempting to connect 2 sections of pipe.

That's when the small explosion happened.

They tell us a contract worker for Enogex was the only person injured.

Police say the man was flown from the scene to Parkland Hospital in Dallas.

The company spokesman tells me they do have an emergency plan that was enacted.

The plan is to insure all employees are accounted for and safe.

They were then moved to a secure location.

We're told the explosion is believed to be an isolated incident and the work site has been cleared.

Alford, the spokesman, says Enogex is concerned about the contractor that was injured and  their thoughts and prayers are with the man and his family.

They will continue to look into the incident and hope to find out soon what caused the explosion.