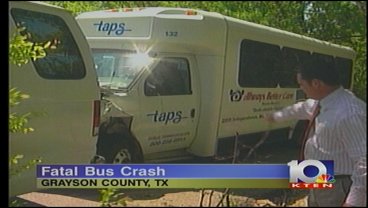 SHERMAN -- A TAPS public transportation bus driver on his morning route struck and killed the driver of a motorcycle this morning. It happened on State Highway 56 just east of Sherman near the Spur 1417. The executive director of TAPS spoke about the crash.

The accident happened at the intersection of Spur 1417 and SH 56 just before 7 a.m. DPS troopers say the TAPS bus was turning onto Spur 1417 from SH 56 when it struck the motorcycle coming from the opposite direction on 56.

The driver of the motorcycle, 45-year-old Howard Cecil of Bells, died on the scene and was pronounced dead by Justice of the Peace James Harris. DPS reports state he was not wearing a helmet at the time of the accident. The bus driver, 73-year-old Paul Gordon of Pottsboro, was not injured and neither was the one passenger on the bus.

TAPS' executive director, Brad Underwood, says the driver is very upset about what happened. "Mr. Gordon is very shook up. He's been with us for five years. He has an excellent safety record. He's never had an accident at all, so today is a real shock to him. We're trying to stand around him and be there for him as a TAPS family."

TAPS has been in business for 25 years. It has 93 buses in service and travels on average about 1.5 million miles a year; and this is the first fatal accident TAPS has been involved.

DPS did inspect the bus after the accident and found no mechanical problems. Troopers are awaiting a toxicology report on the driver, as is standard procedure in fatal accidents, but troopers do not suspect alcohol or drugs were involved in any way. They say the accident is still under investigation.