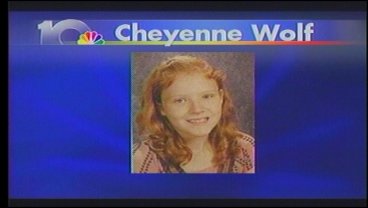 BRYAN CO., OK - Turmoil within the Oklahoma State Medical Examiner's Office is delaying autopsy results in dozens of murder cases and suspicious death cases across the state, including the case of little Cheyenne Wolf. As Katy Blakey explains, it's a crime that still haunts the small community of Bokchito where residents are anxious to see those responsible punished.

Conversation about the death of little Cheyenne Wolf has died down at the local cafe in Bokchito. Though, the opinions are still strong.

"No one has really talked about it recently, but I know everybody wants it to be over with," said Darlene Thompson of Frank's Cafe. "For justice to be done for Cheyenne."

But justice in the case of Cheyenne Wolf is still a long time away. It took over a year for someone to report the little girl missing and then months for investigators to discover her death was covered up, and her remains moved from state to state. And now, justice must wait longer. An autopsy ordered last July is still not complete.

"We have a couple of other cases we are working on, working to get the results for these families, the prosecutors, for a number of people who have been patiently waiting," said Cherokee Ballard, Public Information Officer for the State Medical Examiner.

Turmoil within Oklahoma's State Medical Examiner's Office is delaying autopsy results for hundreds of cases, including Cheyenne's. The department admitted last month there were more than 1,000 uncompleted cases.

The Chief Medical Examiner - Dr. Collie Trant, was charged with the task of completing Cheyenne's autopsy, but he was terminated last month. Cheyenne's case was left unfinished.

Cheyenne's parents - Abel and her step-mother Denise Wolf, face charges of unlawful removal of a body, but Bryan County prosecutors have repeatedly said a completed autopsy could bring more serious charges against the couple.

Something many in Bokchito feel is only right.

"They feel like both of them should be punished. It's a horrible crime."

An expected completion date for Cheyenne's autopsy is not known, but state officials say the case has been handed over to someone else in the department.