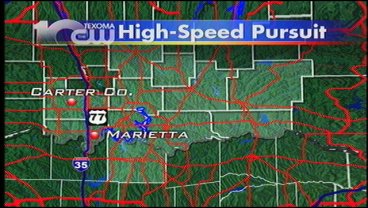 A park official with Lake Murray says a black Chevy Camero carrying six teenagers took off when he passed them near Lake Murray early Saturday morning. The car continued at speeds up to 120 miles per hour, leaving the lake area and darting onto Interstate 35.

The car refused to stop but finally came to rest after authorities in Marietta put up a roadblock. According to police, a small amount of marijuana and alcohol was found in the car.

All six teens were from the Carter County area. No one was hurt in the pursuit.