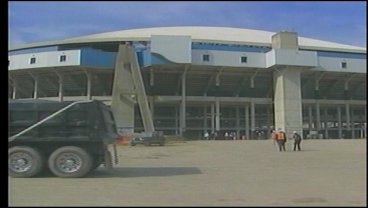 IRVING, Texas (AP) - The old stadium for America's team is about to become a pile of dust and rubble.

With the push of a button at 7 a.m. Sunday, more than a ton of dynamite will blow Texas Stadium into pieces. In about one minute, down will go the building that was home to
the Dallas Cowboys during all five of their Super Bowl championships and was the birthplace of those famous cheerleaders.

The Cowboys moved out following the 2008 season, going to a $1.2 billion stadium in suburban Arlington.

Irving, Texas, leaders decided that with so many other stadiums around, their best option for the well-known piece of real estate was to clear it for future development.