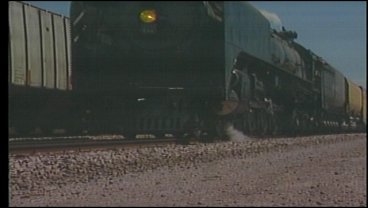 DENISON, TX-- For decades Denison was the home of the MKT Railroad, and the sound of a steam train was commonplace.

Today, many memories were jogged when the whistle blew again.

"I'll go anywhere to see a train like this, I consider it a piece of living history," said Oak Cliff resident Patti Erickson.

Today, as the crowds gathered around Ray Yard in Denison, the anticipation to see a live steam train could barely be contained.

"We get to ride a steam train!" exclaimed the grandchildren on Grayson County Commissioner, Johnny Waldrip.

People from all over Texas came to see what was referred to by one train enthusiast as a "living, breathing dinosaur," a train built in 1948 and discontinued in 1982.

"You can go lots of places and see static displays, but there's nothing like seeing it operate like it's supposed to. It's the closest thing that exists to a time machine," said Erickson.

The Valley Eagle 844 was expected to arrive in Denison at 10:30 this morning, but train buffs and casual observers alike didn't mind waiting until almost one o'clock to see it in motion.

"We get to ride the train, I go ride one every chance I get. It's like being 5 years old all over again, it's so much fun," said Commissioner Waldrip.

After hours of waiting, Denison finally got a chance to see the train chugging into town at over seventy miles-per-hour.

"Very seldom are we able to bring a steam train through Texas, so this is a rare opportunity," said Mark Davis, a representative from the Union Pacific Railroad.

Seeing the last steam locomotive built for Union Pacific was a treat for both kids and adults alike.

"It's special for those seniors that remember the steam locomotive, who used to ride in passengers pulled by locomotives, and then the younger generation which has never seen one before," Davis said.

"This is an old kind of steam train- carries you back so many years, to the great thing's that we've lost," said Waldrip.

This historical trip will take almost a month.