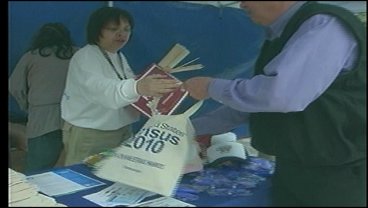 SHERMAN, TEXAS--The 2010 Census tour pulled into the Texoma area.  It's their last push to get you to turn in yours.  Census officials say it costs tax payers more money if you don't turn in yours.

Texas and Oklahoma both have a return rate of only 58%.  Texas is ranked 48th in the United States for overall return and Oklahoma is close behind.  "If you don't have the form in by mid April your going to get a knock on your door May 1st," says Census Media Special, Jenna Steormann Arnold.

It also costs the community.  "It's used for the local community.  It's in the community's hands to make sure were getting an accurate count for planning purposes for the future," says Arnold.

While over half of Texas and Oklahoma residents have turned it in, some say they still have not even received a form.  "I am now becoming concerned.  I am going to figure out why I didn't get one," says local resident Christopher Stokes.

Turning in your form on time can save the Government and tax payers $1.5 billion dollars.

If you have not received a form you can log onto the 2010 Census website.  The link is pasted below.  If you want to send your information over the phone, you can do that starting Monday, April 12th.