Fake Bills in our Area--How to protect yourself - KTEN.com - Texoma news, weather and sports

Fake Bills in our Area--How to protect yourself 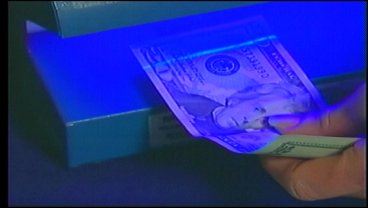 GRAYSON COUNTY, TEXAS--A warning about the money inside your wallet, it might not be real.  Fake money is floating around our area and today another of four suspects in a local counterfeit scheme was sentenced in Federal court.  The scheme involved counterfeit $100 bills made from bleached out $5 bills.  These schemes are happening throughout the Texoma area.

So how can you as a consumer protect yourself?  Authorities say if you find fake bills in your wallet there is nothing you can do about it but turn it in.  If you do find a counterfeit bill, you can take it to your bank.  They will take, but they will not exchange it.  You lose your money.

To protect yourself, examine your bills.  You can hold the bills up to your light to look for the watermark, a symbol authorities say is almost impossible to fake.  If you don't want to scan your bill, you can also buy a counterfeit pen.  "You can purchase a counterfeit pen to check it yourself, but I wouldn't recommend marking up bills like a convenience store does, but that is a possibility," says Sargent Bruce Dawsey of Sherman PD.

He also adds, "Those pens will wear out after awhile and you might get a false positive.  The  money gets pretty dirty.  If you strike so many dollars with a pen eventually it will build a residue on it and it may show as a counterfeit and be a real bill."

Authorities suggest getting cash out from your bank.  They say very few, if any, fake bills get through the banking system.