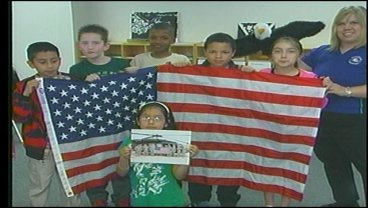 SHERMAN, TX-- A group of kids in Sherman are doing what they can to help our current group of soldiers overseas.

Did you know, for some soldiers in Iraq, there is no access to coffee? Well a group of fourth graders at a Sherman elementary school are doing what they can to make sure those soldiers get their cup of joe.

For the Charlie 7 Platoon in Iraq, coffee is hard to come by.

"Soldiers can't get coffee in Iraq. Soldiers need their coffee to stay awake and be alert for their missions," said Jefferson Elementary teacher, Gerri King.

King's son, Dusty, is a soldier in Iraq. King's class has sent eight boxes of coffee so far to his platoon to help them fly their missions.

"If we didn't know about this, they might not make their missions possible to finish," declared fourth-grader Armando Aredondo.

"They're there sacrificing their lives, but they didn't have coffee. This shows we love you enough to send coffee and say feel the warmth of us in this cup," said King.

This fourth-grade class at Jefferson Elementary in Sherman wanted to show their appreciation for the soldiers who put their lives on the line every day, including King's son Dusty. He called his mom as soon as he had his first cup of coffee in months.

"They feel forgotten over there. He said tell them thank you. It's such a wonderful thing to have someone remember us and send us coffee," King said.

To thank the students, Dusty's platoon flew an American flag around Iraq and sent it to Jefferson Elementary along with a certificate and a photo.

These "special people" fight for freedom every day, and now, with a little help from coffee.