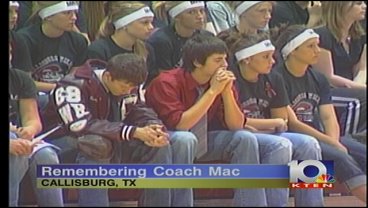 CALLISBURG, TX --The tiny community of Callisburg is still mourning the loss of their beloved 'Coach Mac.' They held a special memorial ceremony Wednesday afternoon at the school gymnasium. Deeda Payton attended the event.

Dennis McAlister was killed Easter Sunday in a traffic accident on his way home from visiting family.

Wednesday, Coach Mac's colleagues and students spoke and shared memories of a man they say they viewed as a role model.

Hearts were heavy and eyes damp as friends and family of Coach Mac remembered the man that meant so much to them. It was clear this was not just a teacher, or a coach, this man was family to a lot of people in Callisburg both in and out of the school building.

"It's really sad to know that he's not around with us because he truly was a coach and teacher that everybody loved, not liked, but loved, and he loved all of them," said baseball coach, Randy Ratliff.

"He was just a jolly guy. He was just always pleasant and the kids loved him," said co-worker, Dennis Perry.

"He was just an extraordinary man," said co-worker, Tim Jones.

At one point during the ceremony, one of the students asked the crowd to stand if they had been affected by something Coach Mac had done or said. It was a very touching gesture that showed just how many people's lives he touched.