Missing 3-Year-Old Collin Back at Home 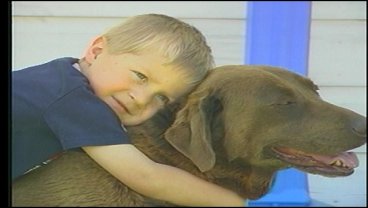 COLBERT, OKLAHOMA--Collin Hannan's life is back in full swing after his 6 hour disappearance this past Easter Sunday.

Collin is not saying much about his 3 mile hike with his chocolate lab Lady, but his grandmother, Sue Hannan, says he told his story to his family.  "Collin talks about it a little bit.  He said he was walking with Lady, he went swimming in the creek, went under a fence.  He says he saw cows and horses.  He also told us he saw people through the fence and a helicopter that put lights on him," says Collin's grandmother Sue Hannan.

Collin's family is overjoyed about his safe return.  They say they are not sure he fully understands the danger, but they say he will not be let out of their sight.  Not for one single minute.