Search For Escaped Inmate Turns Up No Leads 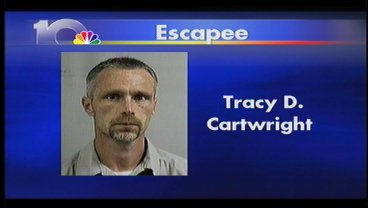 ATOKA CO., OK - Residents living around the small community of Lane, Oklahoma are on alert tonight, after several reports of possible sightings of Tracy Cartwright - the inmate who escaped from McLeod Correctional last Friday.

Early Tuesday afternoon every available law enforcement officer in Atoka County converged on the small community of Lane. Tracking dogs began searching a wooded area off Highway 3, after a nearby homeowner had a run-in with an intruder.

Norma DeBois was alone at her home off Highway 3 when she heard an alarming sound at her backdoor.

"It sounded like somebody was trying to kick it in," said DeBois. "I was in my bedroom folding clothes. My first reaction was to get my pistol."

Grabbing her gun, Norma ran to the backdoor just in time to scare off the intruder. Deputies believe it may have been 42-year-old Tracy Cartwright. The convict was serving 25 years on burglary charges until he escaped last Friday.

"It could be that inmate," said Atoka County Undersheriff Tony Taylor. "It's close to the prison, not far from here. We've gotten lots of calls. A couple last night and some today. "

After an exhausting three-hour search, authorities called off the manhunt. Tracking dogs produced no leads.

Knowing that Cartwright is still on the run worries Norma and her neighbors.

"We don't know for sure if he could come back. It really shook me up bad."

Authorities are relying on the public's help. If you see someone matching Cartwright's description or notice suspicious activity call local law enforcement and they will come check it out.

Tracy Cartwright is described as 6'2", weighing 200 lbs. He was last seen wearing a gray prison uniform, but authorities say he's most likely changed clothes since then. He is considered dangerous.