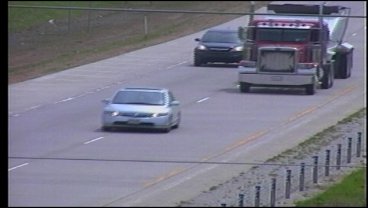 ARDMORE, OK- If you were able to get outside Tuesday, you know that wind could nearly knock you off your feet and driving was even worse! Meredith Saldana talked to local drivers and has more on this story.

It's hard enough when you're traveling long distance on the highways or interstates, but add the winds we had Tuesday and it makes traveling even more challenging.

With wind gusts reaching up to 40-miles per hour, drivers were working hard, just to stay on the road.

"Oh man, my van was wishy washy. So I thought uh uh, I'm fixing to go down and get under the under pass and stay down there," says Bertha Glover.

Glover was headed southbound on Interstate 35 from Oklahoma City and says she has a message for the truck drivers.

"On a big 18 wheeler be extremely careful and watch the little bitty 4 wheelers."

Melonie Lee has been a truck driver for 3 years and says some semi-trucks are affected worse than others in winds like this.

She says it all depends on what they're hauling.

"If you're loaded it's better. If it's empty, it's like pulling a giant wind sail behind you."

She, too, had a message for other drivers.

"Don't ride beside us, that's the biggest thing because anything can happen. That wind's grabbing that trailer, I mean there's only so much we can do."

Our Chief Meteorologist Alan Mitchell says, when the front comes through Tuesday night, the winds are expected to drop off.