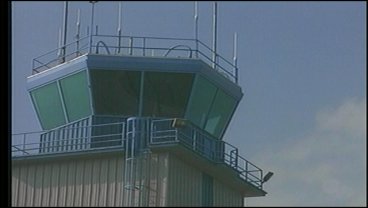 GRAYSON CO., TX - With the extension of Highway 289 open, lots of folks are curious what will happen to the area surrounding the airport. Will we see new industries? Retail businesses? Or housing developments?

In addition to the county and airport leaders, Sherman, Denison and Pottsboro all have a vested interest in development around the airport. So to ensure proper planning for the future, the Airport Zoning Commission is asking the three cities to agree to some new zoning requirements. For example, if a business wants to build in the Denison City limits but it's close to the airport - it would not only have to be approved by the city's zoning board but also meet the requirements set by the Airport Zoning Commission.

The main focus would be on developments within 10,000 feet on either side of the runway.

"The worst thing an airport can do, especially if it's trying to grow, is have incompatible land use," said Airport Director Mike Shahan. "For example: DFW. If you go there, you'll see there are houses all over and they spend around $600,000 a year sound-proofing homes, buying homes and moving them out of the way because of the noise complaints. We're trying to head that off before it happens."

Shahan says the requirements aren't to impede development for any of the cities, but rather to make sure it's the right development - saying you wouldn't want high-rise buildings going up close to the runway.

If the cities agree to follow the airport zoning guidelines a representative from each city would serve on the board to make sure their interests are heard.

As far as development goes at the airport, Mike Shahan says the do have a few interesting projects and are working on getting a new, larger flight school to relocate to the airport.