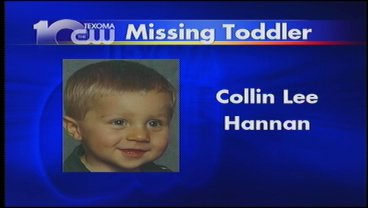 Officials at the scene tell us the boy is okay and in good condition.

The Bryan County Sheriff's Office quickly took command of search and rescue efforts. Additional crews from Johnston and Marshall county, along with the Oklahoma Highway Patrol were also called in to assist with the search. By nightfall, an OHP helicopter was called in, using infrared cameras to search the surrounding area. Oklahoma's Department of Public Safety issued a "Missing Endangered Juvenile Alert" around 9:30 Sunday evening.

Collin's mother, Karen Hannan, said it is not like her son to wander so far away from their home and that she is grateful for the outpouring of support from the Bryan County community.

"It's just really amazing to see all of these people come out to try and find a 3-year-old boy in the small town of Colbert," said Karen Hannan. "It is very amazing and I'm very thankful."

Collin's mother says her son had been playing with the family pet - a chocolate lab - outside their home, when she discovered she could no longer see her child and he would not come when he was called. After searching the property, and surrounding area - local authorities were called and a massive six hour search began for the little boy.

Watch KTEN News Today for the latest on this story.