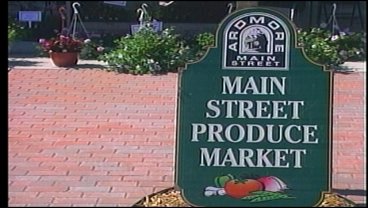 ARDMORE, OK- Produce markets are becoming a popular trend here in the south. Two years ago, Ardmore started its fresh produce market downtown. It usually starts the first Saturday in April, but the recent rains and cold weather have postponed the opening. Meredith Saldana has more on this story.

Organizers tell me the farmers had to wait a little longer this year to plant their crops.

So the opening day for the produce market has been pushed back a few weeks.

Ardmore's Produce Market is held every Saturday from April to October.

Last year, organizers were overwhelmed by the response from area residents.

In fact, business went so well that they even added Wednesday produce markets to the schedule.

All produce sold at the market must be Oklahoma grown.

But, this year the rain and freezing temperatures caused farmers to wait just a little longer before planting.

Which means their produce won't be ready until May.

Pushing opening day to May 8th, the first Saturday of the month.

But, Saturday morning the Paradise Alley market arts and crafts festival will open, as scheduled.

It's held on the same property, right behind the Produce Market.

One of the organizers, Tim Longest, says it's a family friendly event.

"All ages absolutely. Sometimes live entertainment, sometimes bounce things, we try and have something new every Saturday at the market."

There are more than 60 vendors signed up to participate this year.

Selling anything from garage sale items, arts and crafts and even vintage clothing.

The arts and crafts show will open Saturday at 7:30 am and will go until 1 PM.