How Cable Barriers Can Protect Drivers 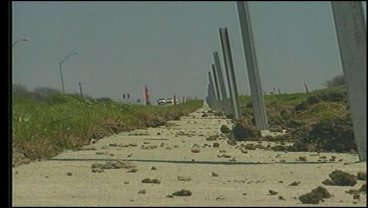 GRAYSON COUNTY, TX -- Cable barriers are being installed in Grayson County to protect drivers. Just yesterday, we brought you breaking news on a deadly semi crash in Love County that authorities say could've been even worse if not for the cable barriers. Deeda Payton reports.

This semi headed southbound on I-35 in the Thackerville area literally ran over a small car and dragged it into the cable barrier. One person was killed, but troopers say more people could have lost their lives if the barrier hadn't been there. "When you deal with a larger vehicle it takes a lot to stop something that large with great momentum so they may stretch the cable or enter a small part of the roadway however it will keep them from completely crossing it at 70 or 80 mph," said Trooper Mark Tackett with the Texas Department of Public Safety.

For that very reason, the Texas Department of Transportation is moving forward with a $2 million project in Grayson County. "When folks aren't paying attention and they go into the median, the barrier will redirect them back into their lane and hopefully stop a head-on collision," said David Selman with TXDOT.

But, troopers say there is a downside to the barriers. "If you're trying to get to an accident scene and have to fight through congestion from the accident you're not going to be able to get to it as quickly as you would if there were no barriers," said Tackett. that is exactly what happened when a different semi caught fire on I-35 in Ardmore.

It took emergency crews longer to respond because they couldn't cross the median to get to the scene, but TXDOT says their setup on highway 82 is a little different. "Probably about every quarter or half a mile we have crossovers for traffic to turn around and go in the opposite direction," said Selman.

While cable barriers can not prevent accidents from happening, authorities say they could reduce the number of fatal crashes.

Crews say another benefit to the cable barriers is that they're cheaper to install than concrete dividers which means they can afford to span them across greater distances.