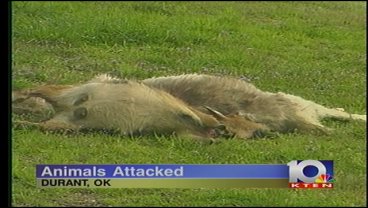 DURANT, OK - Laws in both Texas and Oklahoma allow you to defend your home and your family with force. But what about your livestock or even your pets? Katy Blakey joins us in the newsroom with one Durant woman's fight to protect her property.

Darla Powers cares for her livestock with a lot of love. From her goats to her chickens - just about all of them have a name. But for the past few weeks, she says two wild dogs have been attacking her animals, killing them one by one.

Friends and neighbors spent the evening comforting Darla Powers after discovering six of her goats had been attacked and killed.

"When she called me and told me, I just had to be here with her," said friend Latrell Nickles. "Those [goats] are her babies.

A neighbor handled the unpleasant task of dragging the dead animals from her stock pond. One of the many that have been found dead in recent weeks.

"It's disgusting," said Darla. "First two weeks ago, now today. I had ducks. Those are gone. I had guineas, only three are left. I have ten chickens left out of 40."

Darla says two dogs are to blame for the killings, slowly attacking and preying on her livestock. Her own dog remains in a pen as protection and she's spent hundreds of dollars installing a new fence, but nothing - not even gunfire - has stopped the attacks.

"I shot at the dog. I got in trouble for shooting within the city limits, but I have the right to protect my animals."

Her heartbreak has turned to anger. She's upset that animal control has not tracked down the dogs responsible and nervous they may return and attack again.

Shooting a firearm within city limits is against the law, but without knowing the specifics of Darla's case, Durant Police tell us if an animal is an active threat - property owners do have the right to shoot the animal. Darla says all she wants now is for those dogs to be stopped.